In my successful 13-year real estate career, I once had a client who got on my every.last.nerve.

He hired me, the housing expert, to sell his home. I showed him my plan. I gave him my advice based on experience and facts. I even explained the risks of only loosely following my plan. He agreed my plan would get his home sold the fastest and for the most money. Then he signed a contract with me agreeing to let me do my job so he would see the results he wanted.

The next day he called me. He had decided to change the price we had agreed on. After all, his home was better than all the others.

When no potential buyers wanted to look at his house, he called again wondering what he could do to convince others his home was worth it. He spent money on maids, gardeners, paint and carpet. He hired interior designers and rented a storage space for his boxes.

He suggested holding open houses and giving away enticing door prizes to all who would come and consider buying. He reasoned influencing others was the best way to get to his next place in life.

When that didn't work, he suggested spending lots of money advertising it on a billboard. He even had a business connection who could give me a discounted rate on the town's best sign.

When that didn't work, he demanded a TV commercial so the public could see his home. Of course, this time it would be at my expense.
I did lots of marketing. Lots.

He wanted to know how he could make his home sell. He began to accuse me of not doing my job when he still wasn't following my proven plan. He was getting antsy to move on.
Each time, I simply referred him to our original and agreed upon plan.

He finally agreed to lower his price a bit. A compromise he called it. A number somewhere between what I had originally recommended and what he wanted at closing.
Still.

He just couldn't understand why no one had offered to buy his spectacular house. He had already found the perfect place to go and if this one wouldn't sell, he might lose it.

Once again, I shared with him my expert advice on how the housing market works telling him he would now have to ask much less than our first agreed upon price.

Ready to move into his new home, he finally agreed. He left closing shaking his head wondering why he didn’t take my advice in the first place.

Then it struck me. I do this to God.

I have an agreement with the best professional Life-Planner. I agree to follow His plan knowing it will lead to a much better, even perfect, place. But I get greedy. I want more than God’s best. I want my best to hold me over until I receive God’s best.

And I stay stuck.

Until I cut my losses, humble myself and admit I should’ve trusted The Expert all along. When I forget trust is a moment by moment action, I fail. I must constantly remind myself that God is only good, all His plans are perfect and they never ever fail.

If you’re like me, there are times when you wonder if God’s plan for your life is really good. Maybe you even feel like you're failing. Spend some time today in His Word where He spells our His plan for your successful future!

Start here:
For I know the plans I have for you,” says the Lord. “They are plans for good and not for disaster, to give you a future and a hope. Jeremiah 29:11

Never stop praying. Be thankful in all circumstances, for this is God’s will for you who belong to Christ Jesus. 1 Thessalonians 5:17-19

Don’t copy the behavior and customs of this world, but let God transform you into a new person by changing the way you think. Then you will learn to know God’s will for you, which is good and pleasing and perfect. Romans 12:2

His  peace will guard your hearts and your minds as you live [trust] in Christ Jesus. Philippians 4:7b

Posted by Lisa Smith at 5:30 AM 4 comments: Links to this post

RECEIVE A FREE downloadable copy of my tool: Girlfriends' Guide to #GodGoals by subscribing! 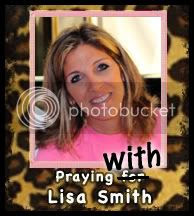